“Some ranch or something about thirty minutes from that small town.”

“Go. Get her and bring her to me.” Petrov hung up the phone. He smiled as he turned to his guests. “So, where were we?”

“We were discussing the shipment.”

“Ah, yes. The shipment. There are fifteen girls with three certified pure. The winner of the auction will be advised where to pick up their winnings, which will be at a location of my choosing the following evening. Are there any questions?”

“Do we get to sample the product?”

“No. Not this time, but you have nothing to worry about. This shipment will be as high quality as all my others.”

While Sabina ate her breakfast, Jason began to clean up the mess he’d made while cooking. He looked out the kitchen window and saw the horses were riled up.

What’s up with that? They’ve never acted that way.

Jason continued to look out the window and scan the area when he saw some movement that wasn’t from the animals.

He grabbed his phone and texted Mac.

Jason: I think they found her. Need help ASAP.
Mac: Understood. We can’t get there in time, so where do you want to meet?
Jason: Where we found Anna and Trevor making out the summer we were almost arrested.
Mac: Copy.
Jason: Bring the trailer. We’ll be on horseback. Be careful. See you soon.
Mac: You, too.

“Hmm?” she asked as she put another forkful of food in her mouth.

“I’ve been riding since I was a kid. Even competed in some roping and other events depending on where we were stationed. Why? Are we going riding today like you said?”

Sabina looked up at Jason and saw him intently looking out the window.

“Because it’s time to go, honey.” He turned to face her. “You can do this. I know you can. Just stay close and do what I say, all right?”

Sabina couldn’t hide the fear in her eyes when she said, “Yeah, um, I guess.”

“Kayla has a pair of shoes by the door. They may be a bit big, but they’re better than nothing if we have to run.” Sabina understood what Jason meant and moved to put on the shoes.

While Sabina put on the shoes, Jason moved to the library and opened the gun safe. He grabbed a bag he kept in the safe and pulled out an HK45, a Glock 19 Gen5, a Beretta M9A1, a Mossberg 590A1, a custom AR-15, and as much ammunition as he could and placed them all inside the bag. Before he closed and locked the safe, because why give your enemy easy weapons, he grabbed a flashlight. “Can you shoot?”

Jason smiled at her and said, “A woman after my own heart. You ride, rope, and shoot? Where have you been all my life?”

“Digging up dirt on the scum of the Earth?”

Jason smiled again. “Yeah, I guess you have.” He looked out the living room window and saw more movement. “Time to go.” He reached for her hand and took it. “Ready?”

“Good. Just follow my lead, and I promise we’ll get out of this alive and in one piece.”

Jason led Sabina to a hidden door under the stairs. When he opened it, she was surprised at what she saw—more stairs.

“Where does this go?”

“The tack room in the barn. My great-grandpa used to store alcohol down here during Prohibition. It also gave him a fast exit from police and a safe place to ride out tornadoes and all that.”

“This place has been in your family that long?”

“No wonder you don’t want to leave.”

They were almost to the barn when they heard the first shots go off.

Assholes are shooting up my house. Bastards!

He felt Sabina jump and squeeze his hand tighter.

“I’m sorry about your house, Jason.”

“It’s all right. Let’s just get out of here safely, OK?” Sabina nodded. “We’re almost there, so we need to be quiet from here on out.” She nodded again.

They always seem to know.

“All right. I need you to stay here while I open the stall doors.”

“Don’t leave me,” Sabina said in a panic.

Jason reached up and cupped her cheek. “I’m not going to leave you, I promise. I just need to get the stalls opened. I can move faster alone, all right.”

Sabina watched as Jason moved to Luna’s stall door first. He was crouched down below the windows, preventing him from being seen.

He seems to have a limp I didn’t notice before. I wonder what that’s from.

As she watched Jason, she heard the men outside coming closer to the barn—the idiots weren’t exactly quiet—and felt another panic attack coming on.

Jason opened Onyx’s stall, and he immediately moved to the tack room where Sabina was sitting by the door. Jason turned with Luna on a lead and saw Sabina in the beginning stages of a panic attack. Onyx dropped his head to hers and quietly snorted. Jason saw Sabina instantly calm down.

Sabina felt Onyx snort at her and looked up. He was right there offering her support again. She looked to the side and saw Jason with Luna. He mouthed, “Are you OK?” to which she nodded yes. He then motioned her out of the tack room and helped her mount Onyx. He mounted Luna immediately after.

Jason moved Luna directly next to Onyx and touched Sabina’s arm. “When we leave, all hell will break loose. I want you to head directly to the woods. Do not wait for me, understand?” he quietly instructed as he handed her the Glock. “You have fifteen rounds plus one already in the chamber. It’s a double pull, so you don’t have a safety to flip. Got it?”

“I know how to use the weapon, Jason. Dad taught me. What about you?”

“Don’t worry about me. I’m gonna buy you some time to reach the woods. When you do, tell Onyx to head to Parke Barn. Believe it or not, he’ll know where to go. Mac will meet you there. Do not leave that barn until Mac or one of the guys or girls you met here last night gets you. Do not trust anyone else. Promise me.”

“I can’t leave you!” she quietly exclaimed.

“Please, Sabina. Promise me you’ll do what I ask. I promise you I will be fine and I will see you soon.” Sabina nodded her acquiescence as he saw a tear slip from her eye. He leaned across to her and gave her a short, chaste kiss, then slapped Onyx on the rump. “Now go.”

When Onyx took off, Jason rode Luna out in the opposite direction, back toward the house. He needed to pull the assholes’ attention to him and away from her. “Hey you, assholes. What in the hell are you doing to my house?”

All of the men turned toward Jason. He saw them raise their weapons when they realized he was carrying as well. Sort of hard to miss since he had both the Mossberg and the AR-15 slung across his body. He raised his Beretta and shot the first man. All hell broke loose after that, but he did what he set out to do. He bought Sabina enough time to reach the woods.

Sabina reached the woods just as the first shot rang loud in the morning air. She jumped when she heard it. Onyx slowed ever so slightly, it seemed, to make sure she was still all right. Once she tightened her grip on his mane, he sped up.

“All right, boy. Jason said to head to Parke Barn. I really hope he was right and you know where to go cause I sure as hell don’t.” She was surprised when Onyx immediately changed directions without any other prompting. 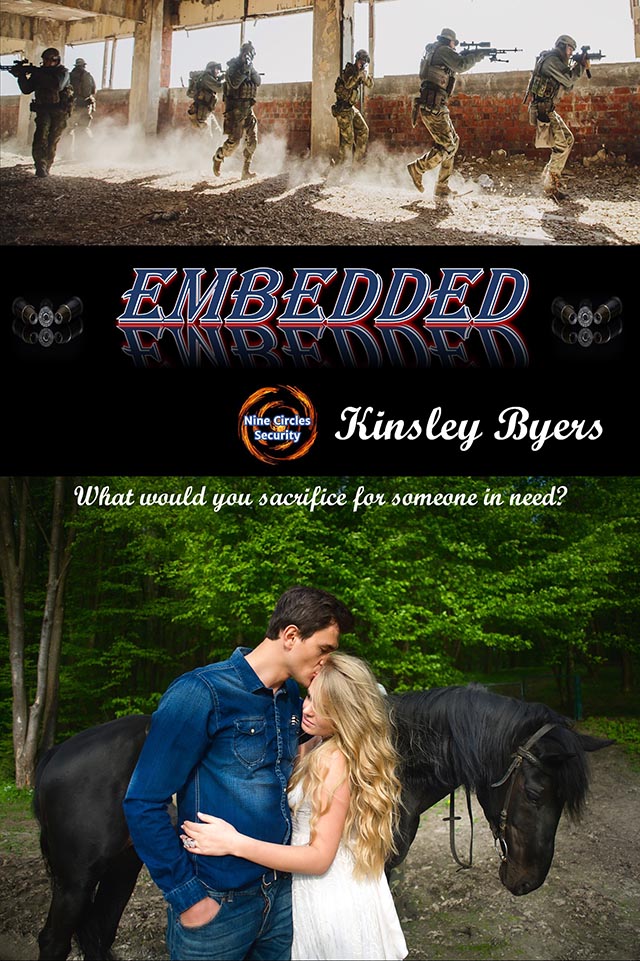